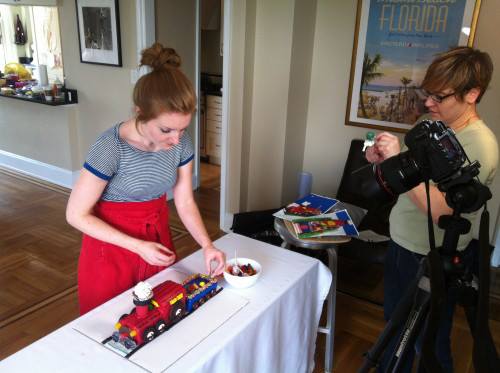 Photo courtesy of The Recipe Club

In addition to the paperback and ebook versions of Extreme Cakeovers, Clarkson Potter has released a very special Apple iBooks Author version, an enhanced ebook offering a higher level of interactivity for the reader. Included in the iBooks version are step-by-step photos of one of the cake projects and the ability to access shopping lists which can then be emailed to yourself. You can connect with the live Twitter feed for Extreme Cakeovers (@cakelava) and tweet about your cake from the kitchen! There are fun, pop-up windows, cake animations, and links to the online retailers to purchase products found in the book.

The iBooks Author edition may be ordered directly from Apple iTunes here.

We were thrilled when our editor Ashley told us there would be a special iBooks enhanced edition and that she would be making one of the cakes from the book for the ebook team to include in the Author edition. Ashley had previously impressed us when she made and presented our Jukebox cake to the team at the Clarkson Potter Summer 2013 Cookbook Launch in August 2012. She was a cake making superstar and had no experience decorating cakes! When we saw her finished Train cake, we were blown away and happy to be able to share her experience with readers of the iBook.

If you aren’t an avid follower of The Recipe Club, an online community for cookbooks presented by Clarkson Potter and Ten Speed Press, you should definitely check it out and join them on their social media! The Recipe Club recently posted a behind the scenes look at the Extreme Cakeovers iBooks photo shoot. The story was written by Ashley Phillips, our book’s editor, and details her experience making the cake. Ashley is now 2 for 2 with her stunning cakes, and we cannot wait to see what she makes next!